But this was working before the firmware upgrade. Also we are sending from an account within their own doman so surely it wouldn't see this as SPAM.

Then do a wireshark trace and find out what is actually happening. I can only go by the fault code you provided, and yes, Office365 can easily block inside a domain and does.

I have put the address in the "allowed" section within Office 365. I have also run a mail trace and I can't see any of the emails coming into Office 365 since we updated the firmware.

Although since changing that we are now getting the error code 016-781.

You had to have changed something on the printer to get 016-781, or someone else did, because that means absolutely no data to the server, meaning the printer never found a connection of any kind to smtp.office365.com, which would not happen due to encryption or protocols, it could only be that the server is put in wrong, or the gateway/subnet/DNS is wrong on the printer.

with a new System there was again the failure, that no mail was send with the office365 smtp server.

But i found the problem:

Check under System/Security -> SSL/TLS Settings, that for "Device Certificate - Client" is the Machine certifikate selected.

On our new system this was not specified, after selecting the certificate of the system, the mail send works with office365 ! 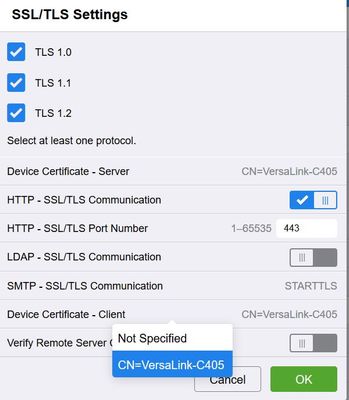 In our case we had to turn off IPV6 and change the DNS to office365.com

Recent experience with a B7035: Kept getting 016-781 server connection error

using smtp.office365.com port 587.  It would send once, then seemed to get blocked for 30 minutes.

I was at the point where I was ready to do a Wireshark trace....then a 2nd Level analyst saw that the device was set up (under connectivity) as "Dual Stack"...changed it to ipV4, and turned off ipV6...

This fixed the problem...

The strange part is that the C8035 runs perfectly and have been running for 2 weeks.

I can setup the devices, do a scan and all is fine. Then some time later they stop working.

Then trying to diagnose devices/configuration and suddenly customer reports, "what did you change, it works now" only to get back to me 2 hours later saying; "now all the C405's stopped working".

So there are DEFINITLY something awry with theese devices.

2 of the devices are on latest (as of yesterday) general release and one are an older version. They all act in the same manner.

I will try tomorrow and disable the dual stack and see if that changes anything and report back here.

can you try this firmware , its from 2 nov , its the latest one

that firmware have been tested without any effect.

I haven't however tested the SPAR's ... but as nothing are mentioned in release notes of SMTP errors i see no point.

also I can confirm that removing the 'Ethernet Dual Stack' have improved the behavior of the SMTP feature.

a user reported that he could go to the printer in production, do a scan, return 4 min later, do a scan (wich failed), move to printer in shipping doing an SMTP, 1 hour later going back to device at production and suddenly do a scan again.

All 4 scans were to same destination, no popo procedure, all devices setup with same SMTP-settings.

After we removed dual stack they have been able to scan for 'a few hours' without incidents...  we are however still a little cautios calling it 'solved' :-)