Scan to folder on network

How difficult can it be? I want a user to press Scan To on the touchscreen and on the next screen be presented with a preset destination folder on a network folder. I cannot set this up on my Versalink C405, whereas I can easily set it up on my WorkCentre 6605.

Am I missing something?

Addressbook > Persons name > If they have fax,email and networks in their name, select the one they want

You say the VersalLink family is nothing like the WorkCenters and you are certainly correct that the WorkCenters are  more straightforward to configure and more reliable. If you go onto the Xerox website you can search (I can provide you the link if you wish) and you will find that not only are they almost the exact same form factor but thier accessories such as the stand and the extra paper tray are identical both - in fact I use the same for both. So nothing like is perhaps not accurate. I appreciate the software is nothing like, so was just trying to find out whether anyone knew how to do this.

Sorry, it truly seems straight forward to me once the addressbook is setup and you are at the printer itself when you would have been following the directions.. 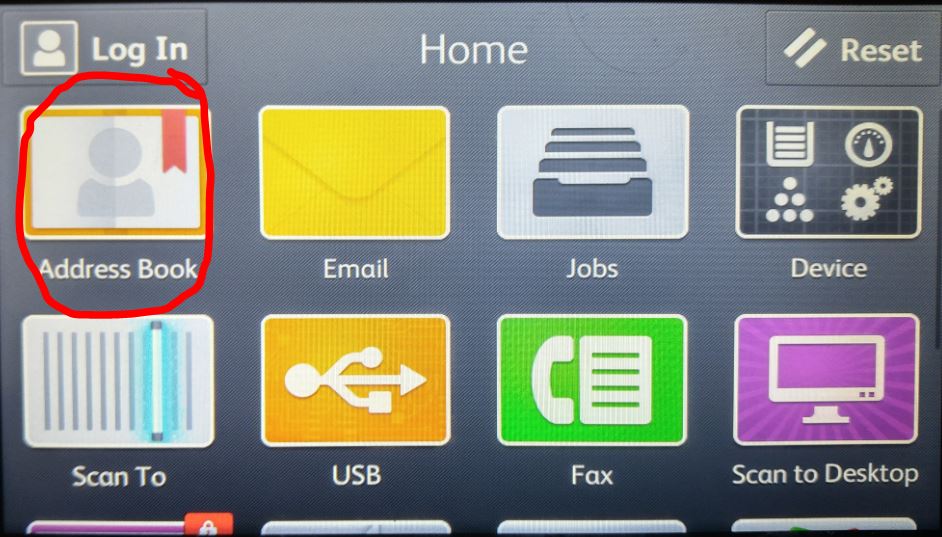 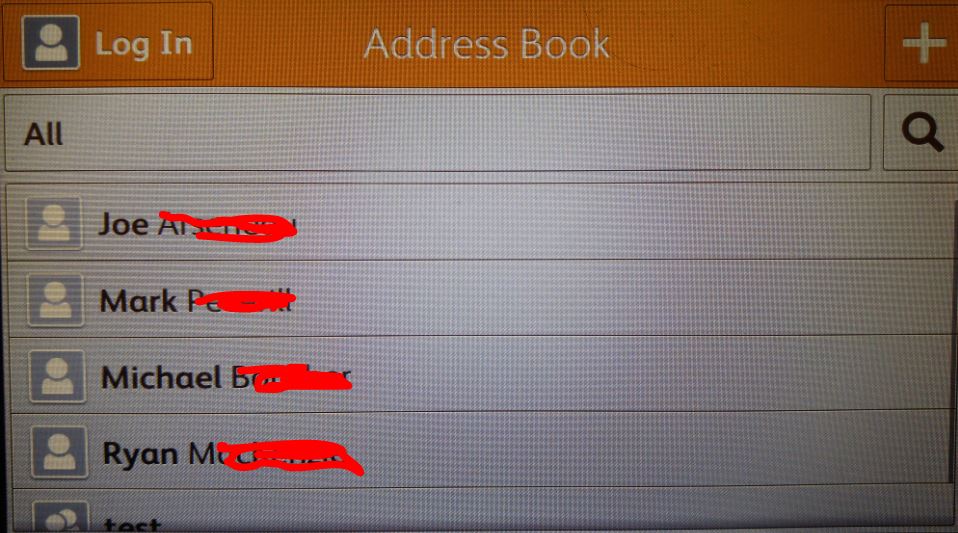 If they have fax,email and networks (Sorry I wasn't more clear by typing the exact wording here, I had made an assumption) in their name, select the one they want 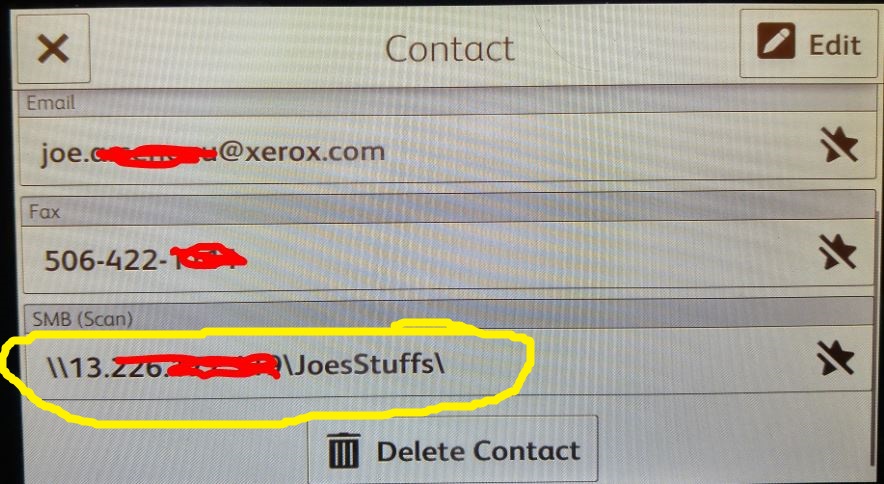 Anything beyond that has to be troubleshooting a Scan failure, and your post does not contain anything about the results of a scan attempt, only how one is made, so I felt no need to verify the formatting of anything.

Thank you for your answer. Much appreciated. If you look at the image below you will note that there is an icon which is Scan To. Should this not work in the same way?

Similar but not the same. All that does is add a step, once you select Scan To you will be stuck choosing a location. Which makes selecting Scan to totally redundant. 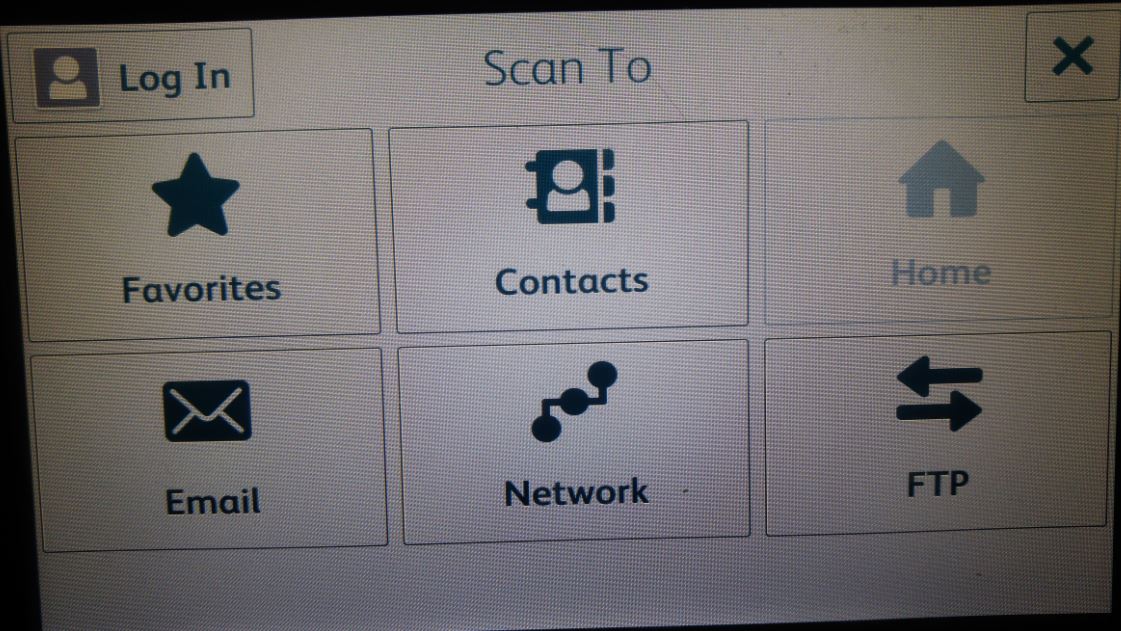 Favorites leads to the favorites within the Address book,

Contacts is just the address book

Home goes to the My Folder app

Email goes to the email app

Network allows you to browse the LAN manually for SMB

Thanks for explaining it so clearly. I appreciate the information.

I guess I made a mistake sticking with xerox. I assumed that a newer very similar model would be easier not more difficult to configure.

You say "Which makes selecting Scan to totally redundant." which encapsulates it, and I hadnt suspected that xerox could produce something which meets that description.

I will interject slightly here though, while I very much stand by my statements, I imagine there is a reason behind it that is understandable.

Not everyone uses an Address book, not everyone has both options available/visible at the same time, Pretty much nobody would think to go to Address book first to do a job, and people hate new things, so if they were used to selecting Scan To > Addressbook and Xerox made them go to Address Book > Scan To the complaints would never end.

I do know that VersaLink and AltaLink are supposed to meet up in the future, some of the technologies will eventually be shared across the platforms that are not currently, I do not know the specifics, or a timeline. But even if I did, of course I could not state them publicly until an announcement came out officially.

Thanks for your help, honesty and reply.

To put it in context - I am a cardiac surgeon with a very small office looking after our private practice. Lets say less than 5 people. After using Lexmark and Brother for years with many difficulties I was recommended the Xerox WorkCentre. It was great and easy to configure for anyone to press Scan To and then enter. It automatically scanned using our presets to the network folder. (there is a server and 2 NAS - it is fairly safe and secure). I was so pleased comparing with our previous MFP's that I ordered the Versalink believing that the apps based control would be a further improvement. We did not definitely need an upgrade at that point.

I was disappointed that it was more difficult to set up the features we required, and online help did not answer our questions. Previously we could set up a workflow whereby an adminstrative assistant presed ScanTo and then the default folder on the network appeared and she pressed enter and it was scanned with our preset defaults.

Something significant has changed here and it is interesting to learn of your conjecture. I will remain interested in that, and if you can feed these thoughts back somehow to Xerox that might be useful.

Thanks once again for providing some excellent information. You also helped me with scan to email in a separate thread, and that's been extremely helpfull. I will be interested to learn of developments for VersaLInk and AltaLInk..

Okay and how to configure the manually SMB?

I have a Synology NAS what settings do i need to configure to scan to a folder?