I am having issues with scanning to a directory.  We have WorkCenter 7535's and WorkCenter 6655's on the network.  Our scan directory is a file share on a Microsoft Server 2012 R2.  Multiple folders are set up in this file share for different sections, and each building has it's own domain account for scanning.  Most devices have no problems at all scanning to our scan directories.  Some of the printers scan the first couple of times perfectly fine, then receive an error "Remote Directory lock failed".  Once that error is recieved, each scan after fails with the error "Login failure.  Check user password, and\or setups.".

This only happens on some of the printers, and it only happens after multiple scans back to back are attempted.  Multiple printers in multiple sections and multiple buildings experience this issue, while sometimes a printer 50 feet away has no issues at all.  If a printer will scan twice before it fails, it will always fails after 2 tries, if it failes after 5 tries, it will always get to 5 and then fail.  If you allow the printer to sit for a while and try to scan again, it will scan with no problems.

I have tried scanning to the point of failure and intentionaly tried scanning several more times trying to see if the domain scan account will lock out, It has never locked out, even though the error from the printer says it is a login error on all fails after the initial fail.

Here is what we have done so far:

1. Confirmed all like models are on the most recent\same firmware version.

4. Performed an On Demand Overwrite From the Control Panel

4. Confirmed that the share name and path is entered in the printer correctly

6. Confirmed permissions are set on the share and folders correctly with full control

8. Confirmed time on network and printer is the same, Printer pulls time from NTP

9. Confirmed that there is more than sufficient space available on the share

If anyone has something on this issue, I would greatly appreciate any help.

Probably need to disable the lock files then.Just go to this address but put in your IP address obviously.

Thanks!  That has partially resolved the issue.  Before it would go a number of scans, then would get a Remote Directory lock failed, then every scan after that would get a login error.  Now more scan jobs go through before getting an error, and the only error given now is the login error.  Again, I tested scanning enough times after the first login error so that the network security would have locked out the account, but when I check on the account it is not locked out.

Now update the 6655 to the latest and use it to initiate the login failure with the Network trace running, then compare it to another 6655 that doesn't get locked out side by side in Wireshark. (This isn't a possibility in the 75XX) 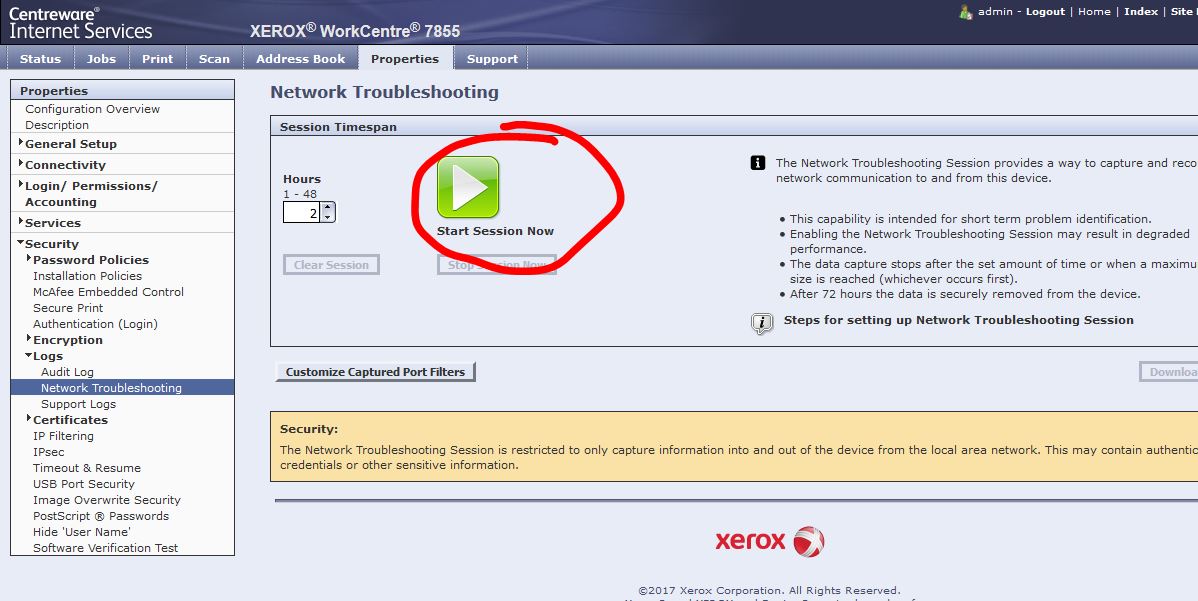 Of course the update itself to the device may fix it. In which case the same may be said of the 75XX, which can be obtained here.

So, I found out that the reason it gives the login failure after a number of back to back scans is due to network security.  It was seeing it as a threat and would deny the account for a period of time.