I've been having this issue with my Xerox 6505 DN all-in-one, where it doesn't scan when commanded from PC. When I want to scan from the PC, using Scansoft Paperport 11, (or any other program for that matter, even MS Paint!) the program complains that it cannot make a connection with the scanner. Doesn't matter if I connect through USB or via LAN, using a TWAIN or WIA driver (I can see the drivers and select them - but the "scan" button in Paperport remains greyed out)...

I normally connect to this device via LAN (tried USB only this afternoon for the first time just to be sure - didn't work also, same error message). The stupid part is: printing works without a problem. (also via LAN).

I'm using Windows 8.1 Pro (64 bit). Another silly thing: when I first bought this device, I was still using Windows 7. With Win7, it worked without a problem. I then upgraded to 8 and later 8.1, and still it worked without a problem. Then, for different reasons, I decided to do a clean OS install, formatted my harddrive and re-installed 8.1 from scratch. It's since then that the scanner doesn't work any more. Keep in mind: this is the same pc and same OS it used to work on!

I've tried many times to re-install the driver.  This makes no difference. The driver is rather old also (May 2013). There used to not even be a driver for Windows 8...

Currently, if I really need to scan, I scan straight from the Xerox device to a shared network folder. This is an intermediate solution, which has its downsides. For one, it only scans to PDF and it's also not handy if I want to add multiple scans into one document.

I've been working like this for over a year now, but it's been getting on my nerves lately and I would like to see this resolved.

Anybody got any idea?

I don't have one to test, but from the sounds of the issue it is an issue with Win 8 not allowing the driver to initiate.

Which would make sense in the clean install assuming the driver was installed on Win7, and then updated to Win 8 you would not have the EFI boot to stop unsigned drivers initiating.

If this is correct, the methods here may help you

And the driver is from February 2013 on Xerox.com.

Does it currently work in other applications like Windows Fax and Scan ? If it is just in Paperport we could be troubleshooting the wrong thing entirely

Thanks for your response!
My motherboard indeed uses an EFI bios. Could this be the culprit? I'll make sure to read up about it. To be honest, I don't think this is the issue though, because I never received an error about the drivers not being signed and the drivers on the Xerox page are specific for Windows 8.x, so I'm guessing they are signed then?

As said in my initial post, it happens in ALL applications trying to use the scanner, even MS Paint eg. It's not reserved for Paperport, so we can rule that one out already.

I'll have a look at that unsigned driver's issue. If this resolves my issue, I'll make sure to return and enter Kudos to you!

The solution with the unsigned drivers did not seem to work.  So I tried the following:

The only other pc I have in the house is a Windows 7 x64 laptop.  I installed the Xerox scan drivers onto this machine too and tried it.  The result: it works flawlessly with Win7 x64, as I suspected.  So the Xerox machine itself is not at fault here, but I never really thought that.

I can now scan from my laptop and, via the LAN, save the scanned documents in the correct folder on my Win 8 machine, but that's hardly an optimal solution...

Oh yes, this might be of interest too: I used to have an HP Photosmart C6180 all-in-one as well, also connected to my home network via LAN. The Xerox was actually the replacement of this device, since the HP was an inkjet and I wanted a laser printer. I remember that, when scanning from the Win 8 machine, when both the Xerox and the HP were still installed, I could choose which device I wanted to use for scanning. When I chose the HP, it worked just as it was supposed to. When I chose the Xerox, it failed with the aforementioned error message, and it still does. I now no longer have the HP inkjet, I gave it to my dad because for his use it was a perfect fit.

All this for me is an indication this is probably a simple Xerox driver issue. But I have no idea how to solve it since re-installing the driver does not help.

You can remove it in the Device manager.

Just look in the Imaging Devices , right click the Xerox driver and choose Properties. You may be able to just click uninstall, then reboot and install it again, but I would do the overkill and select Driver details and take note of each file and make sure they actually have been removed.

Thank you, I'll make sure to try, and I'll report back here.

Before I try and remove all this, I want to report something here: when I looked at the driver details, I see that the provider of the driver is mentioned as "ESET", this being the provider of my anti-virus program NOD32 (in the "smart security" suite).  The driver is also shown as "not digitally signed".  See below : 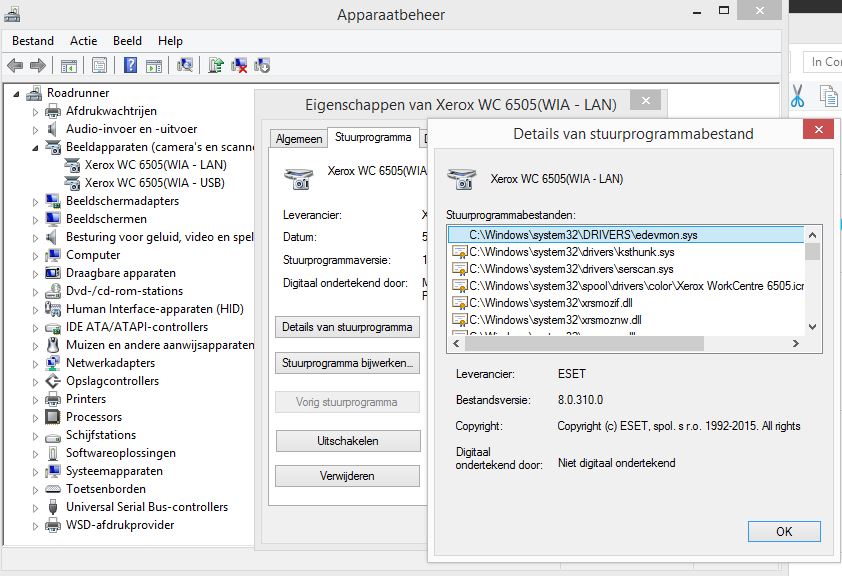 Could it be that my ESET anti virus is somehow blocking this driver??  Or at least getting in its way?  I've tried disabling the ESET firewall, but that did no good (obviously, because it happens for USB as well).  But I'm finding this VERY strange!

I'll try deleting all the drivers now, and before re-installing them, I'll try to completely disable my ESET anti-virus.  Maybe even uninstalling it and re-installing it back after.  (for this I'll obviously cut my PC from the internet first)

I'll report back here with the result...

OK, so that IS the problem.  I deleted all the drivers AND uninstalled my ESET anti virus.

I then re-installed the Windows 8.1 x64 xerox scan drivers.  Didn't work!!  In the device manager, it's listed as an "unknown device".  I says something is wrong with the installation of the driver and it cannot continue.  No amount of trying or pointing to the drivers worked!!

But then I re-installed ESET Smart security, and from that moment on, it quit working again.  In the device manager, there is that ESET driver again blocking the access to the scanner driver.

So now I know what the problem is, and how I can solve it.  I guess I'll contact ESET now and ask them what to do.  If somebody here knows a way of contacting Xerox about this, this might be interesting info for them to know as well...

I am with Xerox, consider us notified. I will forward this info to the developers.

Thanks Joe. ! I hope I'll be hearing from Xerox soon.  In the meantime, I'll contact ESET as well.  See what they have to say about this.  If they don't respond in the manner I'm expecting, then I know what I'll have to do: get rid of ESET and start using a different anti-virus program.

BTW, this was also the reason why I did work on my Windows 7 laptop probably: on that laptop, I use Bitdefender for anti-virus.

We received a support request from the customer on Friday evening 10/2 at 9:48 PM.

We received those log files from the customer on Monday 10/4.

We exchanged some emails and were told by the customer we had to reply before Friday 10/9 or he would install another antivirus software. A strange statement if you consider he has been "working like this for over a year now".

We analyzed the problem and asked for additional log files on Monday 10/12.

We also informed the customer edevmon.sys is a driver responsible for device control. If the customer changed the settings, the scanner device could be blocked and printer device not, even if they are part of one hardware. We wanted to check the settings and Device control logs to be able to say more. Hence the question for additional log files. We also suggested to try to test the new version 9 of ESET Smart Security on this machine which is due to be released at the end of the month.

Customer told us he kept his promise and installed another antivirus.

We regret we can't help the customer if we are not given the opportunity to help.