Sign In Help
Turn on suggestions
Auto-suggest helps you quickly narrow down your search results by suggesting possible matches as you type.
Showing results for
Search instead for
Did you mean:
Options
9 Replies

I have to say your tips worked well. Although on mine I did both reboots, the HDD Initialize did not work but the Storage Device Intitialize Mode reboot worked. Thank you for the help.

I've turned on the printer then pressed the home button. Got to the HDD initialize and boot screen. Selected one option after the other and finally it worked.
0 Kudos
Share
Reply

Hi - has anyone found a solution to this? I have managed to get into the diagnostic menu by sheer luck, so i can navigate the display but no idea what to do. Have called xerox service and they are trying to provide me with a quote for a service, but so far no one has gotten back with one. I really need to sort this out asap as its keeping me from doing important work. Any tips please?

Yes I had exactly the same problem on my Versalink C600, thought it was broke for good and it's virtually new with only 1/4 for the original toner cartriges used.

Found out if you turn it off then press both buttons when you turn it on, it opens in a special sort of mode which allows you to do a memory reset.

after that I updated the Xerox software on my PC and Firmware on the printer, been OK since.

I just got this error code tonight.  Did anyone ever get a resolution to this?

I had to schedule a service appointment with Xerox to fix it. I couldn’t find a solution on my own.
0 Kudos
Share
Reply

Having this same issue. I just called my service guy and he said he will check it out. Till then have to wait.

Did you ever find a solution? My printer just started giving me this error as well. No amount of restarting has fix this issue for me.

The HDD needs to be initialized, which is done via the diagnostics menu (Special boot mode)

The directions for which are Xerox Confidential, so they cannot be disclosed on the forum.

So either a service technician needs to be dispatched, or you need to obtain a Service manual.

Sorry I can't be of more help in this case.

I've been trying to resolve this 116-331 error message on my own using existing discussions on this forum, but haven't been able to figure it out. Has anyone experienced this error on startup? I've followed the on-screen instructions with no success. When I enter the diagnostic I find that IOT 2 in the NVM will not initialize... no idea what that means but it may be helpful to someone here. 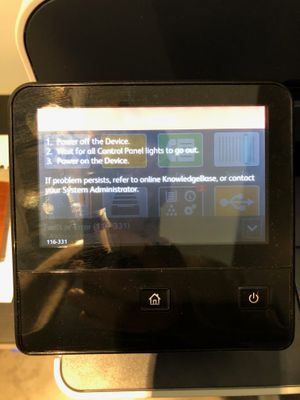 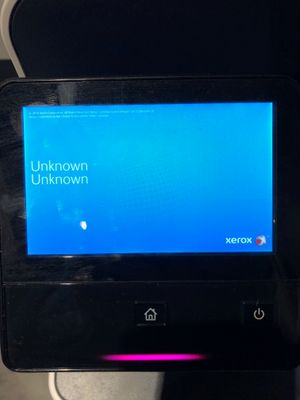