Some details on the setup...

There are no communication issues when...

• communicating between Fiery RIP and C60

The only communication issue is the printer connecting to any internet-based services. It doesn't connect to external mail servers for sending notifications, etc., but most importantly, it's not communicating with Xerox servers for Smart eSolution services.

Does anyone with this setup having communications with Smart eSolution services working? If so, what's your setup?

You just need to update the firmware or install a new certificate on the printer, It has been at the top of the downloads section for the C60 and all it's DFE's since April in a Security bulletin. The link leads you to the directions and firmware or cert here 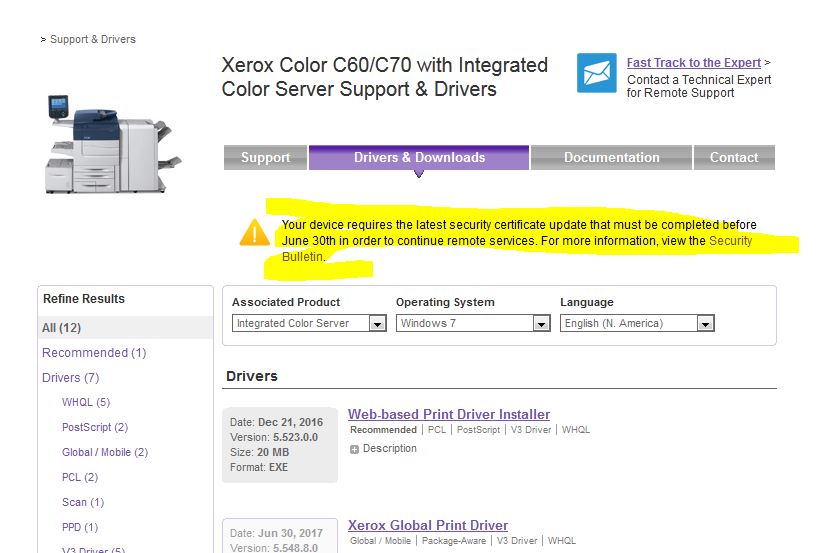 Yep, installed that update months ago (May), so that's not the issue.

Beyond that you would need to look into your firewalls and proxy.

This is an old post, but this is the info needed to resolve the issue for those who are having this trouble.

Definately make sure that you have the latest software installed on the machine (fiery sw not an issue). There was a change made to the 'remote services' servers a couple years ago which will not allow ESolutions to work with older SW.

In particular in your case... the DNS that you have setup on the machine config is incorrect. 100.100.100.102 will not work as the DNS. This address is the gateway (on fiery), which does not provide DNS services. You need to use a legitimate DNS.

Also setup network services such as email on the machine, not the fiery.

If the fiery does not power off/on when powering off/on the machine, then the machine and fiery are out of sync (sometimes happens with power interuptions). In that case, power off the machine, wait till it is fully powered off. Wait another 5 minutes to see if fiery powers off. If it does not, press/hold the green led (button) on the fiery till it powers down. Both the machine and fiery should now be off. Wait one minute. Press the same button on the fiery once (briefly). The fiery should begin to boot. Wait 3 minutes, then power on the machine. Within 5-10 minutes the two should now be in sync again. If not, then the fiery software usually needs to be reloaded.

Check:
-----------
Print a machine config sheet and make sure the machine network settings are as follows: