I tried putting in a 200 Pin SODIMM w/o luck

Please advise what type of module will fit this machine.

And, NO. I'm not intereted in buying the "productivity" kidt for $150

toi get a piece of RAM that costs $10

Thanks for your note. And that's the exact same information that I got from Xerox. Please re-read my original post, which i submitted becasue of the contradiction in their documentation. And for the fact that the socket on the motherboard will not accept a 200 Pin DDR2 SODIMM module. I'd love some help, not just a restatement of the information i already posted.

Hmm, could it be that the socket is smaller than the 200 pin memory you got? what about 144 pin?

Could you snap a picture?

Jump to solution
i was thinking of that but 144 looks like a different config. it's the same size as the 200 sodimm...but the notch on the socket doesn't line up with the typical so-dimm...the notch is off towards the center just a bit...in my searches i've seen very specific ram for printers, and it's not cheap...i'll snap a pic and sent it your way...thanks for the offer..I wrote back to tech support and asked them to escalate the question to a higher level, but they said they didn't have a mechanism for doing that...suggested i contact customer relations. The tech support rep i spoke to was great and tried to dig deep...cheers
0 Kudos
Share
Reply

Thanks for your offer to help. I’ve attached some images at bottom per your suggestion. You should be able to see the notch pretty clearly.

exactly what Xerox calls for
[image from them attached]

Xerox Customer Service now tells me it’s a 144 Pin SODIMM with a 38x53 layout but can’t seem to find any other info on specs: speed; ddr2 or ddr3; etc. They also found a note in the system advising that 1024 chip no longer works in machine [what?????].

Very nice tech support for the Phaser printers insists it’s a 200pin chip, that she has no info on the 144.

It’s really hard to tell from a picture that may just be representative anyway.

It seems that no one at XEROX has good info, and they all claim that my query can’t be escalated. From experience I’ve found that dropping a brief letter to the Office of the President [of any company] gets prompt results. I’m very grateful for your help, and perhaps you’ll come up with some specs and save me a postage stamp ;-)) 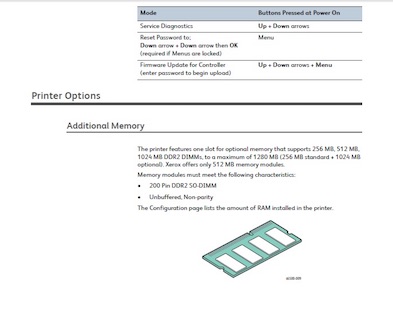 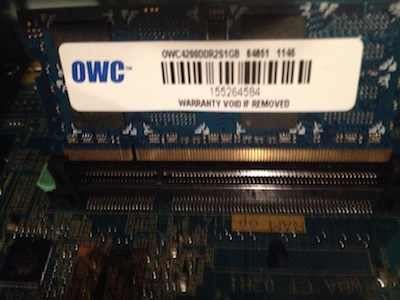 It does look like it's really a 144 pin SODIMM, and not a 200 pin, which means the statements in the actual service manual etc. is wrong :O

I actually found a post about this on a blog just now, if you're interested you can have a look HERE.

Someone who's had the same problem as you and solved it, there you can hopefully find the specs needed.

Thanks Kinzi...I've searched for a post like that for the past 2 weeks to no avail...I was on the phone today again w/product support [who can;'t see tech support's tickets]...while on hold for 15 minutes i checked my email and saw your note...i advised xerox that the forum was providing the info i need, and pointed them to this discussion...they seemed surprised that it came from the "support" area of xerox...i can't fault xerox for not having the answer to every question and they could do a better job getting one hand to know what the other hand is doing. This machine has been in production since 2011, and it's clear that this isn't the first time this question has been raised. By now they certainly could have updated the documentation.

Also, as the blogger's post comments point out, it can;t be assumed that all machines that seem similar -- both in 6500 & 6600 series -- do not necessarily have the same components.

Anyway, here's to the community of the internet [and also to xerox for providing space for the conversation].

Don't forget to select "Accept as Solution" if the reply resolved your issue, as this will help others!
1 Kudo
Share
Reply

I, too, have been looking for extended memory for my two Xerox Phaser 6500N Color Laser Printers.

After comparing other memory cards with the 6500N memory socket, I concure with DavidK95C-xrx that it is 144 pin memory.

The only place I found the memory was Transcend 512MB PC2-5300 144-pin DDR2 SDRAM SODIMM at PC Connection, but they were temporarily out of stock.  They told me to go ahead and order the memory on-line and I would only be charged when it again is in stock and shipped to me.

From the time I ordered to the time they shipped was 20 days which was good for a hard to find item that was out-of-stock.

After turning the printer OFF at the Power Switch, I had to carefully fit the memory card into the 6500N memory slot, since it is a tight clearance on the ends.  Turning the printers back ON, the Startup Page indicated the new memory registered just fine giving a total memory of 768 MB.