Sign In Help
Turn on suggestions
Auto-suggest helps you quickly narrow down your search results by suggesting possible matches as you type.
Showing results for
Search instead for
Did you mean:
Options
5 Replies

1. You still have the color settings changed

2. You haven't run the color registration

3. You are not changing the stocks when loading the tray

4. Printer is in some way faulty via hardware

No idea on Airprint since that is 100% driver free and completely controlled by Apple. Windows I would guess the MS class driver is in use (Or the Xerox v4 without the print experience app)

Install this one,and do it this way

Was not usign Adobe--will definatley keep in mind and switch those settings.

I have tried printing from both the Photos application on Windows 10 and my iPhone through Airprint.

What application are you printing from?

All Adobe applications will do that, Blue=purple, Red is maroon, people will get sunburns etc and the fix is simple 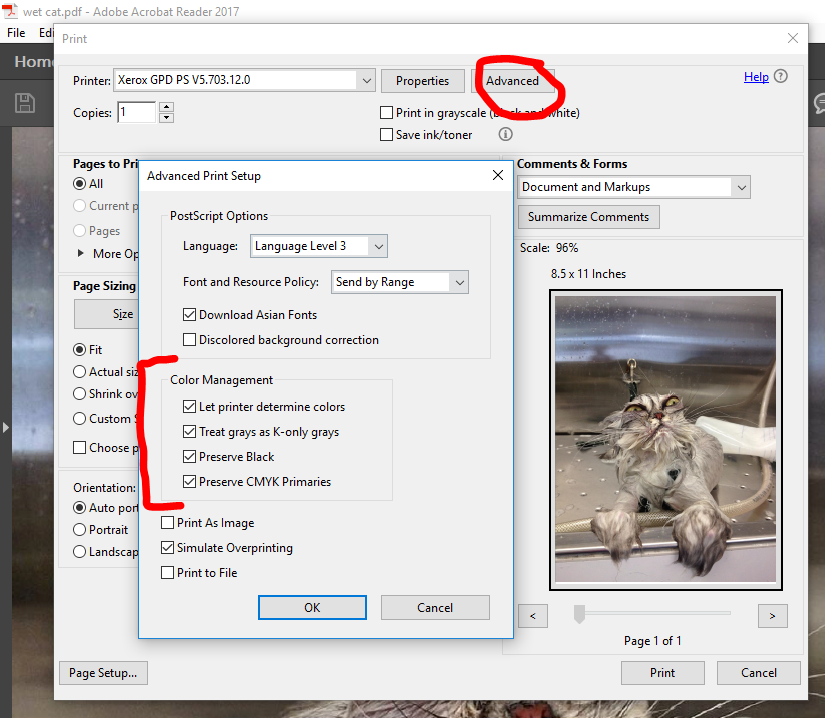 In Photoshop and everything else they make there is a Color Management section with the same or similar options.

Once you set them once for a printer they stay that way. This affects a PS driver vastly more than a PCL driver

Blue appears purple and will not correct

I have had this device for less than a week--recently switched over from an ink jet.

2 questions really, both relating to the blue toner.

1) I attempted to print a picture 4x6 (well 3.5x5 on a 4x6 size, but...) on glossy cardstock, using that setting.  The first thing I noticed was that the blue colors appeared very purple.  Thought it was a fluke (1st image print) so printed again--same thing.  I went and printed off the system status and the ghosting report.  The 'B' boxes for each printed the same shade of violet (think red grape).

I decided to swing the Y->B to +50 (towards blue) in the print dialog screen.  Image looks the same.

I went into the printer's browse (after switching back to Y->B = 0) and switched color management first to Cyan + 2 then Cyan + 5.  In both cases, the printed image appears the exact same.  Reset everything to base before moving on.

2) I decided to try to print a different picture (same dimensions and paper-type).  This one was outside, so the blue was more pure cyan.  In any event, the first third of the sky looks okay, but then it gets slowly overtaken with reddish banding--also the 'true' blue in this picture also appear purple.

Getting a little frustrated as this seems like something that should come pregrammed pretty good, and for this sort of thing (well these things) to happen as toner and the nuts and bolts aged.