Hopefully one of the Linux gurus here can provide some guidance.

I have downloaded and installed the latest linux x86_64 deb file for the VersaLink C7030 from the VersaLink C7020/C7025/C7030 download page on Unbntu 20.04 LTS.  I started the Xerox queue manager with the following command, as directed:

When I try to set up a print queue, the only printer model available for me is the "Xerox Office Standard Driver", which looks like some kind of generic driver.  I know in the past when I have used the linux Xerox driver, there were multiple printer models listed in the "Printer Model" box, and this is also shown in the instructions at https://www.support.xerox.com/en-us/article/en/2077210 .

Is this just the way the driver is now, or has something gone wrong with the Linux installation?  When printing, this generic driver doesn't have any way to select print quality, and it is missing a bunch of other things you would normally find (like all the Postscript stuff).

I noticed that there is only 1 PPD at /opt/XeroxOffice/prtsys/ppd, which is XROFFSTD.ppd.  Do I need to manually add some more PPDs? 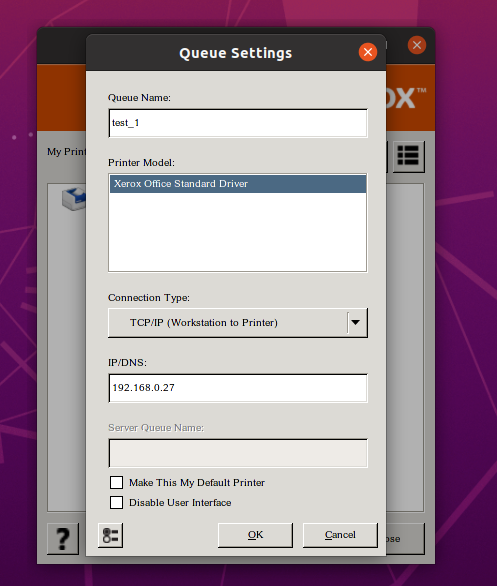 I searched our online knowledge base and found two articles for installing Linux drivers for you to review. If you are still having issues after trying these steps, I suggest that you call into our support department for assistance @ 1-800-821-2797.

How to Install Print Drivers to use with Linux OS.

How To Setup UNIX and Linux Printing.

I downgraded the driver to Xeroxv5Pkg-Linuxx86_64-5.20.597.3452.deb.  Network discovery works and I get a list of printers.  The bad news is that the VersaLink printers aren't included in that version.

In XeroxOfficev5Pkg-Linuxx86_64-5.20.661.4684.deb (the latest download), /opt/XeroXOffice/prtsys/v5lib is missing all of the libraires for the different printer families (i.e. libWorkCentre3335.so, libXeroxColor570.so, libColorQube8580.so, etc.).  The only printer model library in this latest distribution is libOfficeStandard.so, which is probably why this is the only printer that shows up in the list box.  It seems that this distribution is packaged incorrectly because it is missing the printer libraries, unless that is intentional and the Xerox Office Standard Driver is the only one now being offered/  Or this latest driver works differently.  Network discovery also doesn't work in this latest driver.  Again, I am using Ubuntu 20.04 LTS.

I checked the XeroxOfficev5Pkg-Linuxx86_64-5.20.661.4684.deb file itself with Archive Manager, and those printer libraries are not in the package, so it is not an installation problem.  If those printer familiy libraries are supposed to be included, there is a packaging problem.

TammyL-Xerox, thank you for the response.  I would appreciate if you could pass this on to the Linux driver team, as I have documented issues between the previous and current driver.  The links you provided and the other Xerox online documentation indicate that there should be a list of printers in that box, so something seems amiss with this latest driver.

Also, the Xerox documentation that explains how to install the driver (including the links above) needs to be updated.  The executable is no longer xeroxprtmgr, it is now xeroxofficeprtmgr in the latest driver.

I called the number above provided by TammyL-Xerox, and got redirected to three other phone numbers.  Whenever I mention "printer driver", nobody seems to know where to direct the call.  Finally, someone agreed to take a detailed email from me regarding the problem and pass it on. That was on 6/22, and I have not heard back.

This type of driver support is disappointing.

I have reached out to our driver team and am waiting to hear back from them, they are reviewing the articles I provided to you and making the needed changes so we can update our knowledge base. .

I have the same problem using a debian buster. I install the latest driver available on this website but when I run xeroxofficertmgr I only see the generic ppd to select.
Even if you create a new printer with that ppd, nothing happens, because it even seems that it doesn't send the documents to the printer.

Would it be possible to make drivers available for the different models (I'm trying to configure a VersaLink C400 and a WorkCentre 5865), or a somewhat more detailed manual on how to configure this generic driver, if it's the one I really have to use?

The Linux global driver was recently updated and it looks like Xerox has decided to go with just this generic driver, which doesn't expose all advanced features. Very disappointing, as the previous Linux driver had specific drivers for each model (unfortunately it was missing the new models).

In Ubuntu, the CUPS driver gives pretty good control of my C7030.