Sign In Help
Turn on suggestions
Auto-suggest helps you quickly narrow down your search results by suggesting possible matches as you type.
Showing results for
Search instead for
Did you mean:
Options
5 Replies

Go to 'Start' > 'Devices and Printers' > 'Select Printer model' > Right click on 'Printer Properties' > Click on 'Tools'. "Export": This button is used to export settings to a file. Select the type(s) of settings you want to export from the list, and then press this button.

Hi Roger - Did you end up getting any closure to your question? We too are struggling with a lot of the Xerox products for administrative configuration and keep getting dished off to other resources or outside sales.
0 Kudos
Share
Reply

Nope, this editor didnt work. Here is what we have done so far

Downloaded aind installed the XML editor. For the lack of a better name, we used the PS drivers name. <Model Name="Xerox Global Print Driver PS and made the changes we wanted. 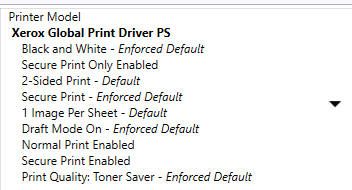 Then in the registry, we added in 2 registry settings based off the instructions on page 12 of the XML editors book.

Then installed both the PS and PCL printer drivers using this powershell script.

The printer gets added, print stays at normal print, not secure print. Its like it did not read the registry or XML files. We've tried adding the printer in, and off a machine that already has been manually configured, added the registry keys for xerox in "hkcu devmodeperuser", devmode2, and these settings as well for both PS and PCL, rebooted, logged back in, ran as admin, nothing changed.

We tried copying out registry settings and re-adding them

(user defaults follows that but its a long hex word)

NONE of this has worked, NOTHING we tried has worked. We put a capture on a machine and installed the print drivers and reapplied all the changes, and the settings didnt change. We looked at REG, CFG, INI, and more. This document is 13 years old, so of course, it didnt work either

http://www.office.xerox.com/support/dctips/dc08cc0441.pdf There is no options tab in either the windows 10 print driver or Global.

This file's date time stamp did not change  xUNIV*.cfg

We dont have a print server, nor will we be making one. We were hoping to make a simple config file and install it as  defaults for over 100 printers, and it seems that nothing we tried from Xerox has helped.

Is there anything I may have missed?

Take a look at the SFTHT-01U document for the Xerox Print Driver Configuration Tool.

Here is the link to the SW.

I hope this helps.

I see no one has responded to this post yet. So, at this point I would recommend contacting your local Xerox Support Department to speak with a Product Specialist for more assistance. Please call 1-800-821-2797 or 1-800-835-6100.

How to configure the settings and export them to 100 other printers?

We are trying to use the Global print driver. However, there are settings that we want to setup for every user so that each printer has common settings. We want Secure print, 2 sided, Enhanced Printing features, and in PS, toner saver. Before, you go go into Administration, and use the drop down on the configuration tab to make all the changes, export a CFG file and use that as the install for all other printers to use that as a default.

We've tried captureing the registry, checked INI files, INF, XML, and we it seems that you can only configure the printer on a per user basis instead of per device.

Is there another way to do this?