After a few days please do let the rest of us know if your issue is completely fixed, BTW are you using Apple or PC, with android or iPhone for your printing to your Xerox?
1 Kudo
Share
Reply 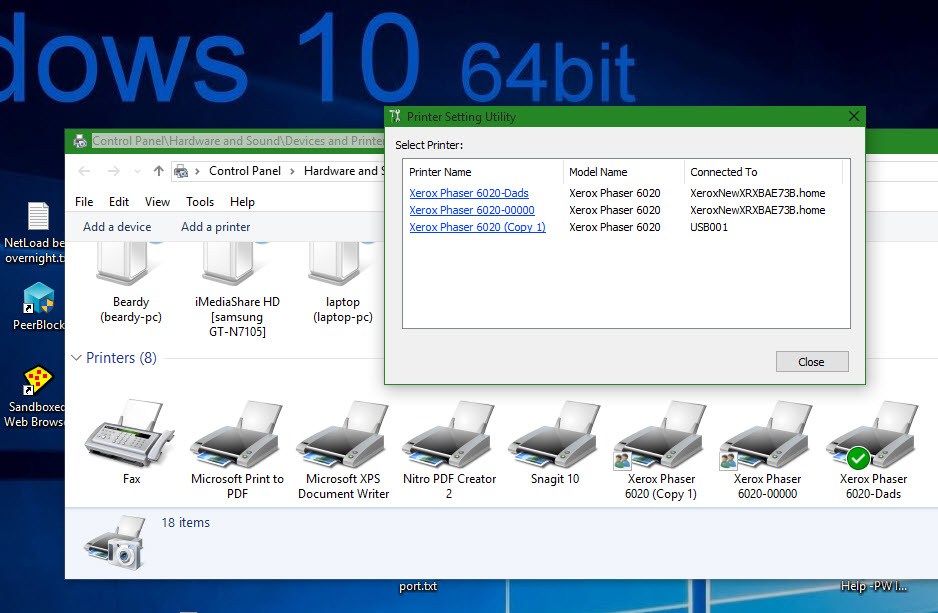 As can be seen in my image; I have three 6020 printer icons for the one printer and one is for a USB which is now also connected, so even if the Wi-Fi and its associated ip configurations is incorrect surly the USB option would fire up this printer?

for me, i can confirm - it's working properly!

My issue is now partially resolved.

After receiving a replacement printer from Xerox but still finding I had the same issue, I have followed all the advice given in this thread: installed latest firmware, also Locked its ip address in my router, still with no reprieve. So I went on to D/L Widows 10 latest installation package and drivers from Xerox’s site and installed them but leaving the old installation from the printers CD intact, I now have six printer drive icons to choose from when clicking to print from my Windows 10 PC, I also (opposed to the directive during installation) left the USB cable connected from my PC to the Phaser.

Now for the last week my Phaser is permanently accessible to print via my PC and other PC’s connected to the router (LAN) without any problem . . . also I could print using its Wi-Fi connections i.e. iPhone, android phones, . . that is until yesterday when suddenly nothing using Wi-Fi could connect, however the PC’s could wake the Phaser and print (presumably because I have left the USB cable connected) but even when woken none of the phones could connect via Wi-Fi. This likely occurred at the same time as my BT infinity2 internet after a week decided to change my ip address for me, as BT issues me with a dynamic ip address as opposed to a Static IP address. However after a power down, reboot and recycle of my Phaser I could then print again via Wi-Fi?

I will now study this phenomenon with my Phaser and also look to see if there are any threads covering this aspect, if there are none then it’s probably better if I start a separate discussion relating to my dynamic ip address problem?

I have the same problem and I am going to see if I can solve them using thye advices I see here.

But in general it is the worst printer I've ever purchesed. If anybody I know will ask me to help them purches a new printer I'll make sure to tell them how horrible this model is. Like honestly one of the worst. The company should be ashamed releasing something like this to the market.

After an Xerox technician came for a second visit while this printer was within warrantee, he arranged for a replacement 6022. However this one also has the same issue to this day.

I am wondering if the issue has something to do with my broadband supplier changing my ip address every so often.

I have the same problem, this printer prints whenever it wants, I woult rate it as absolute garbage, I tried every forum and every youtube video possible to try and solve it with no result, I thought buyng a Xerox would be a greater quality but I was wrong, might as well buy a one time use HP or something like that, you will get better results. I.m sorry for all of you who got your self this heap of junk