The Technician and I were able to troubleshoot the issues I mentioned. It turned out the first 7500 unit I decribed had a piece of the imaging unit broken off and lodged in another roller touching the imaging unit. we were able to remove the foreign object but unfortunately the roller it lodged into was slightly damaged and is still causing discoloration on prints.

The second 7500 unit I mentioned, with the black imaging unit, we decided to test another imaging unit in that space and it worked fine, but the transfer unit was also making some impressions so we replaced that too from another unit we decided to scrap. It is in good working condition ready for sale now.

I am working on attempting to get a large stock of recovered Xerox Phaser 7500DN printers (and other models) to good working condition for sale as used. I am coming across an issue while attempting to service these 7500 units. So far, I have had it happen in two different units and I do not want to continue until I can fix it and keep it from happening again.

So, the issue started when I was swapping imaging units between two tested and working 7500 units (one is making a noise so Im pulling good parts from to get the others to better condition). the 7500 I swapped good working imaging units into started to have a magenta streak on all prints from end to end. I went to clean the window, no change, I checked the imaging unit and found there was a straight line pressed into a specific point in the imaging units roller. I didnt know how it happened, but I decided to just swap the imaging unit that came from the unit back into the 7500 and it should be good. I checked it before inserting and it was fine but, when I ran the printer after installing the original imaging unit also developed the streak on the paper and the indent line on the drum.

So, I decided to leave that printer for now and move onto another, seperate unit from these two. It was working well so I moved it to a space to clean completely, remove all scuff marks and blow/vaccum all loose toner in the unit out. I finished cleanning it and moved it back to my work station to do final prints of its quality and take pictures, but when I went to do a "remove smudges" print out to get rid of any loose toner I had gotten on the inside while vaccuming I found that the prints had the same long streak from end to end, but in black this time. I checked the imaging unit and found that it too now has a line pressed into the drum like the magenta imaging unit in the other 7500.

Now I have two 7500 units I cannot sell because even if I or a buyer put a new imaging unit in them, they would still have the same issue, and I wont continue to replace imaging units because I know itll be a waste of money. I need help on what I can do to fix what is causing this damage to the imaging units and how to avoid it in the future. it seems to possibly some sort of specof dust stuck somewhere or a part inside that is pressing on the drum that it isnt supposed to be.

I should add, I have been running the clear smudges/streaks troubleshoot selection each time I test these units to clean them out and such and it seems to be that each time this started it was caused when I did that operation. Also, the line pressed on the magenta imaging unit of the first 7500 this happened in seems to possibly be aligned with the tab on the belt cleaner, but I dont see how that could be doing it. and also, I have some spare belt cleaners and I have replaced the belt cleaner in the second 7500 that has the black streak and it hasnt changed anything.

As far as my ability to do repairs on these printers goes, I am generally an amateur when it comes to experience in servicing printers, but I have been taking a lot of these sort of printers apart to sell parts from and I have taken 6700s apart and put them back together to swap parts, like replacing broken panels and internal components, so If I need to open the unit up to fix this issue I may be able to do so myself.

We have contacted a professional to come out and assist with the repair on tuesday (10/18/16), but I want to hear input on attempting to repair the issue before then.

I can provide, at this time, these picutres of the lines on the imaging units and the streaks on the paper at this time. 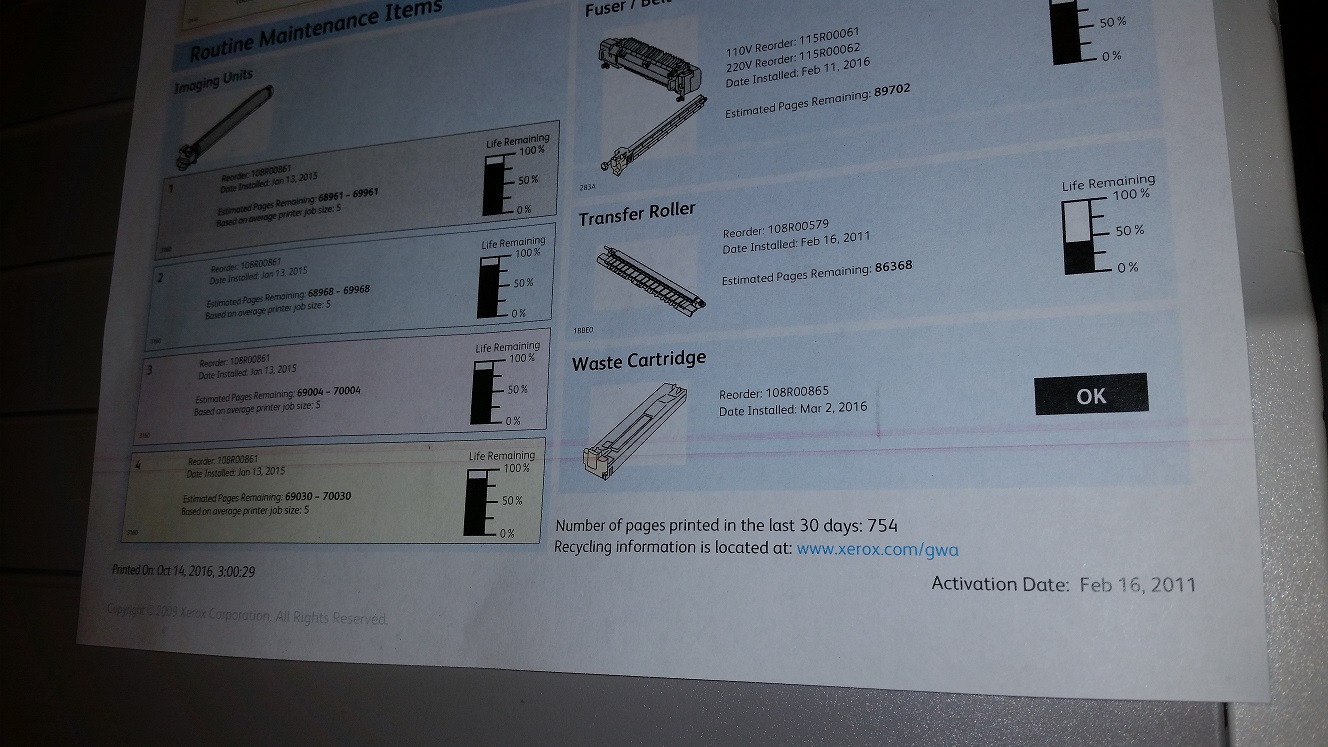 print before issue started, no line 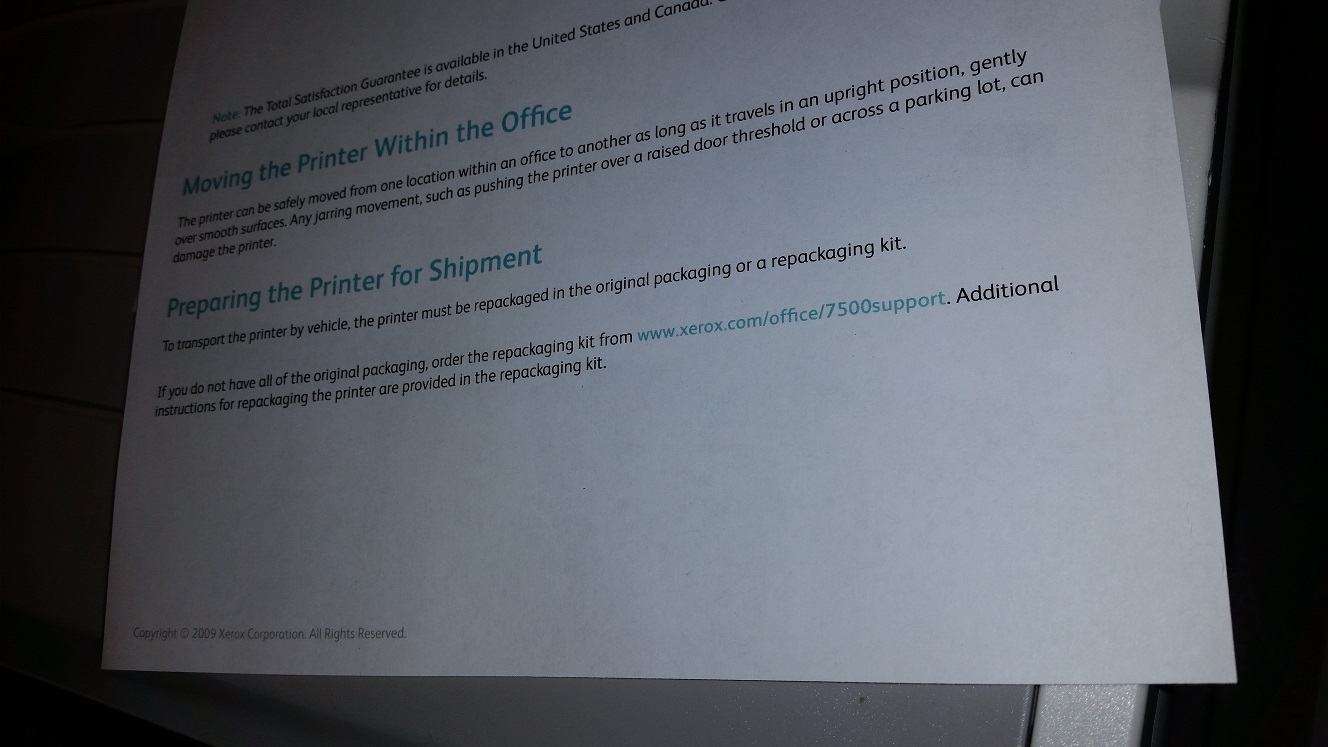 magenta imaging unit from first 7500 that developed the issue. you can see the line pressed into the drum where the light hits it. (not colored magenta) 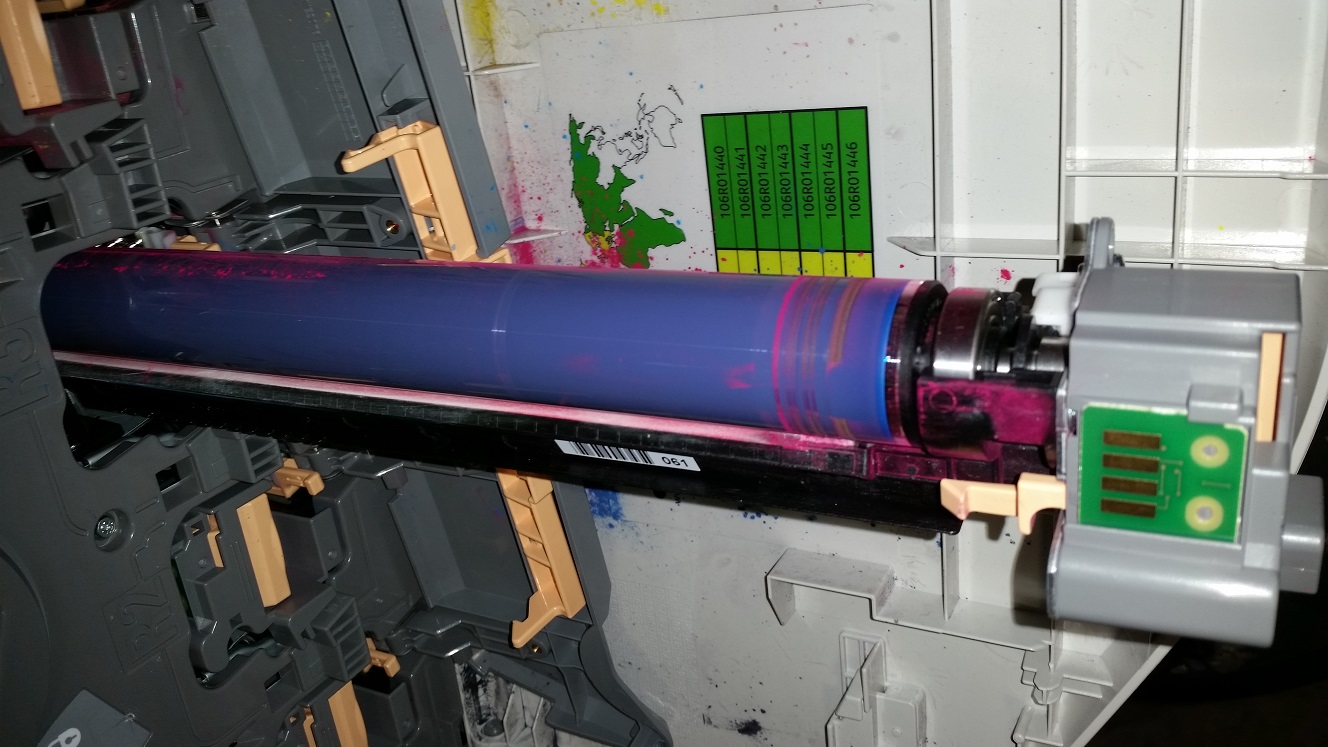