This Xerox Phaser 6180DN printer easily handles 2-sided print jobs from Windows 7 machines, but our Windows 8 64-bit computer is unable to select the 2-sided printing feature from any of the Windows 8 Global, PCL or PS printer drivers. When the driver is installing, it identifies the printer found on the network as 6180DN but then installs the driver with title: Xerox Phaser 6180N PS.

In the Printer Preferences settings control panel, when I select the drop-down labeled "2-Sided Print", and then select the "Flip on Long Edge" option, it pops up an warning window that says "Duplex Unit : Not Available", and will not allow the setting.

I called Xerox technical support and was lead through a series of diagnostic steps and a reinstallation of the Win8 64-bit Global driver using the install from web option, but ended up with the same inability to print double-sided pages.  She said that some users see improved functioning with that method, but many do not.

I don't think that she was able to submit a problem report to the Xerox software development staff, since our particular machine is out of warranty, so I am submitting my notice here. 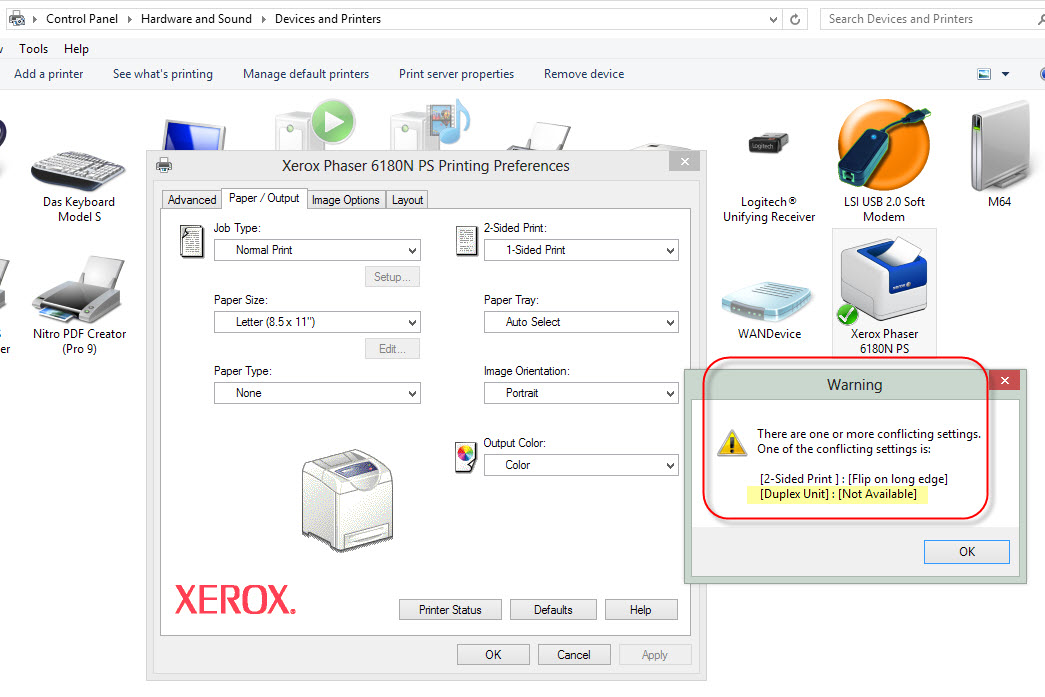 Thank you for using the Support Forum. Please try a couple of things.  First enable the Duplex Unit option in the print driver as follows.

In the Printers and Faxes window: 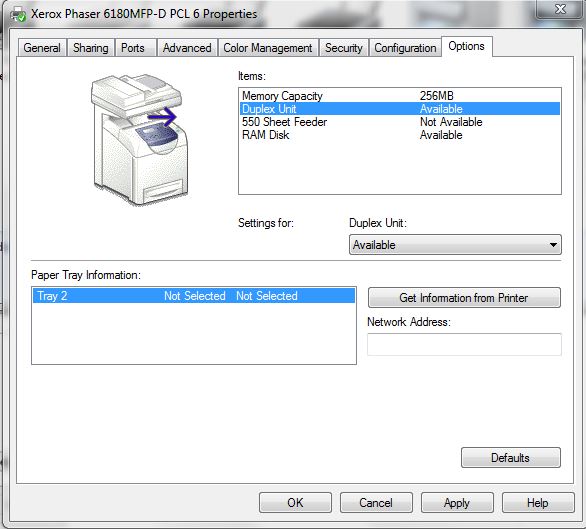 Then try choosing 2 sided flip on short edge feed and see if that will work.  If the problem continues please consider contacting your support centre for further assistance.

Thanks for the reply.  Unfortunately, that option selector in the menu that I found is grayed-out and therefore not changeable.

The menus of the latest 6180DN GPD PS drivers for Win8 do not exactly match the layout shown in the screencap of your 6180MFP PCL6 driver, and they have no plain "Options" tab.  However, there are three similar sections in the GPD drivers that I have installed, as shown below: 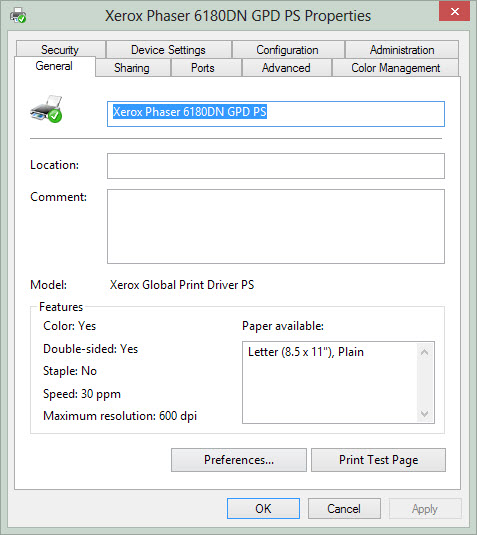 But then the Properties, Configuration tab shows "Duplex Module: Not Installed", and that setting is not editable. 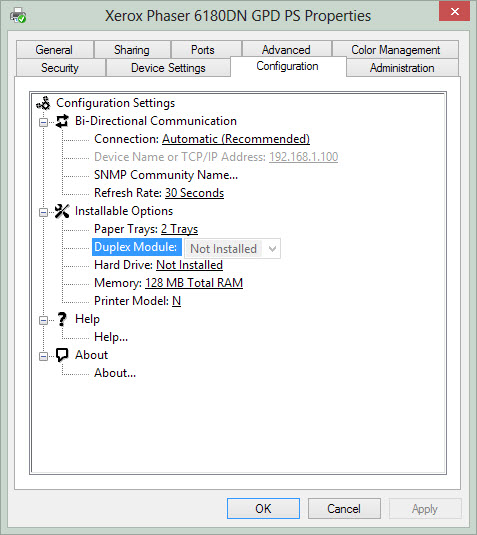 And, in the Printing Preferences panel we see that "2-Sided Printing" is grayed-out and not selectable. 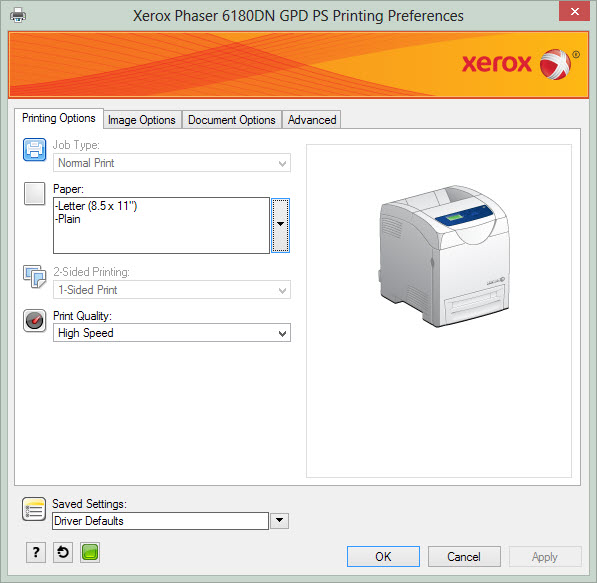 Any Windows 8 print job that I try to send to this printer will not allow the 2-sided option to be selected.

Note that these GPD drivers do acknowledge that this is a Phaser 6180DN model, which includes the duplex feature, and in one of the three control panels here, it did show that Double-Sided function was available.  Also to note is that the Windows 7 computers with the Windows 7 Postscript driver have no trouble printing 2-sided pages on this printer, and all of their control panels show that the duplex module is installed and functioning.

So, it still looks like the problem is caused by a bug in the Windows 8 printer driver software, for which the developers should be notified.

Updated Results: Printing 2-Sided with the PCL-6 driver (but not Postscript)

Taking a cue from the reply of CherylO-Xerox, I uninstalled the GPD Postscript driver. Trying to use the GPD installer to configure the PCL6 driver failed with multiple instability issues. Finally, I downloaded and installed the stand-alone PCL6 printer driver. It incorrectly identified my 6180DN printer as a "6180N" and therefore defaulted to disabling the duplex printing options.

I followed CherylO-Xerox's example to make the Duplex Unit "Available" in the Options tab, and then in the General tab, clicked the Preferences button and set the 2-Sided Print option to "flip on long edge". After applying those settings, the General tab's Model Features section displayed "Double-sided: Yes" and I was able to print a 2-sided page.

So now we can print 2-sided documents, but will have to put up with the various PCL6 graphics issues compared to the Postscript capabilities.

As of today, Xerox has not updated either the PCL6 or PS (Postscript) drivers for Windows 8 that were released last May 14, 2013. Neither of those drivers correctly identifies the Phaser 6180DN printer, instead branding it a 6180N without duplex printing capability. Hopefully soon Xerox will learn of this continuing problem and issue new Phaser drivers that are fully compatible with Windows 8 and 8.1.