We have a printer that apparently stopped printing in color one day. A test page from the device prints color, but anything printed from a computer does not. There are multiple Windows 10 x64 computers connected to the device through Windows 2012 R2 print server and none print color. We have tried both the Global Print Driver PLC and Phaser 8560 Series Class Driver. We have other printers, same model, installed on the server and working just fine on this driver package so I'm not sure what's causing the issue. Any ideas?

Messed with this printer for over an hour today. Removed every driver on the computer, removed printer, re-installed printer, tried 4 different Xerox drivers (all settings say color), and it still does not print in color. However, you can print test pages from the printer control panel and its color. An entire lab of computers and none of them will print color when sending jobs to the printer. Is there something on the printer that differentiates color print jobs and color test pages? Just weird how it works fine for test pages, but not for print jobs. again we have about 26 of these models in our district and the others work fine. I'm just trying to figure out if this is a device problem or some sort of settings/configuration problem. Any ideas? Thanks.

I've seen Xerox devices that would do that :

1. If you set them to BW as default for print on the devices webpage

2. If you enable Accounting for color prints and don't send an accounting code

I'd give screenshots, but I don't have access to this model device and don't know another with the same interface

Thanks for the reply.

Everything we've checked is set to color. Haven't seen anything set to BW only.

Here's the really strange part. It's only isolated to the computers in the same room with the printer (one teacher computer and about 30 student computers). They all print BW. If they print to a different colored printer it's color. If I connect to the printer (because it's on a network) from a computer outside of the class and print to it its in color. There is no active policy preventing these computers to print in color to this printer so we are just stumped. I've checked everything I can think to check and just getting nowhere.

Ok so this is what we've discovered and can't really figure out why it's doing this.

If you clear all of the drivers off of the computer (Win 10 Pro 64 bit) and then add the printer from the print server, Windows doesnt seem to like the driver I guess and somehow changes it (I guess through Windows Update - it's not clear). The driver on the server is:

However, when you add the printer from the server to the computer (remember the computer now has no drivers installed) it installs the following driver:

And that driver isn't even installed on the server so not sure why it's installing that one. Now I did notice the version numbers are identical, but the name is different so I'm assuming these are different drivers.

As long as the PS Color Class Driver V1.1 is installed it wont print color no matter the settings.

Now here's the weirder part. If the computer has the drivers cleared again and you install the printer locally via USB it installs both of the drivers mentioned above, but it defaults to the Xerox Phaser 8560/8560MFP Series Class Driver. It prints color this way.

2) Is this even the right driver we should be using for these printers...

The Global Driver doesnt list the Phaser 8560 under it's compatiable list and we've tried it and no color.

District wide we seem to be having issues with these printers not printing color so it would be nice if we could figure this out. Any help would be appreciated.

Class drivers are made by and distributed by MS in Windows. They only work in Windows 8 and up. They are never going to be the preferred driver for anything beyond simplicity, they simply don't have full capability unless yo uninstall a companion application from the printer manufacturer to go with them, for Xerox, that is the Xerox Print Experience.

Every manufacturer has one, it is part of the V4 driver specification. If you want to use V4 (Class Drivers) drivers and not every PC has identical Windows versions, you need to use manufacturer drivers, because they don't rely on MS updates.

So you can use the V4 driver from Xerox obtained here 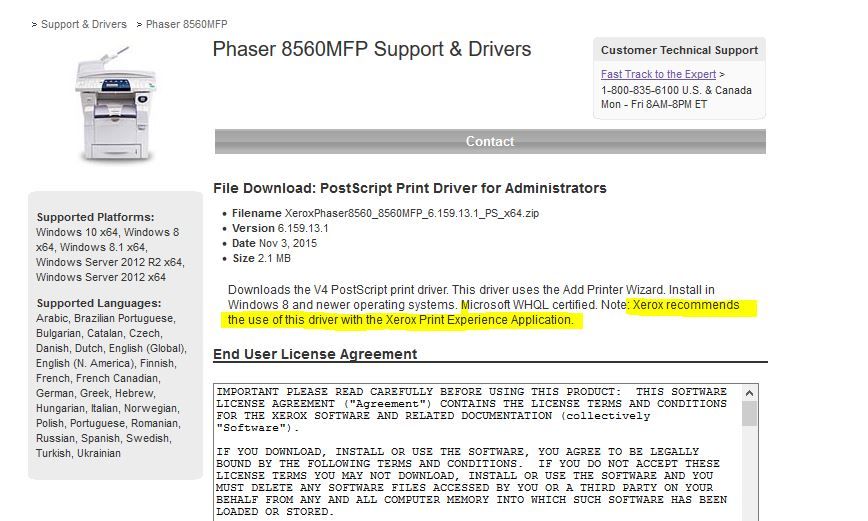 Unfortunately we've tried that as well. We've tried both V3 and V4 drivers and no color. We just can't figure out why the computer is adding and using the color class driver when that's not the driver specified on the print server. When you plug the printer up via USB it installs via plug and play and defaults to that exact driver, but it doesn't seem to want to use it from the server. It instead loads up the color class driver. That's what's maddening about it.

Luckily, all of our PCs do have the exact same Windows version. We push out images and updates via policy to groups so they are identical. We just have to figure out which driver will work with our setup. We don't have an issue with other V4 drivers on these Win 10 Pro 64 bit setups so not sure why the Xerox V4 drivers would give us these fits.

I'm going to try and install all versions of both the V3 and V4 GPD and run them one at a time and see what happens.