WorkCentre 6015N : no ethernet connection (and no errors reported)

The story: I had some trouble using the scanner via etheret. Before was working well.
Maybe the problem was due to a windows update..
After several test on windows,  I decided to update also the printer firmware.
AFTER THE FIRMWARE UPDATE THE PRINTER IS NOT MORE ABLE TO BE RECONIZED BY THE ROUTER.
Using the DHCP all the address are 0.0.0.0. (the gateway is 192.168.178.1)
Using DHCP/I obtain strange numbers... Address: 169.254.50.324 and Gateway: 6.0.6.0
Using Panel and forcing the address no error, but it is nor reachable
I performed the system and network NVM reset, but no behavior changes
If I remember well the original firmware was 01.00.18, the new one is 01.00.23

Is it possible to find the older firmware ? (at least as printer was working!) 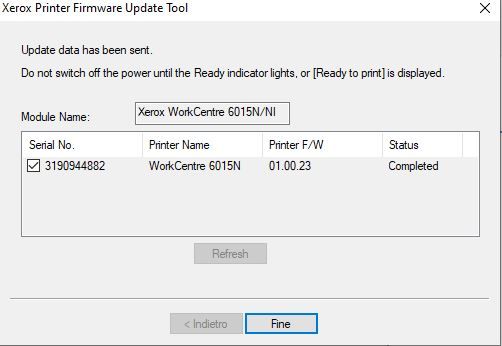 Re: WorkCentre 6015N : no ethernet connection (and no errors reported)

Thank you for using the Support Forum. It is not possible to download the old firmware. Only the current version is available.  Please take a look at the article on manually configuring the machine on the network.  If you have followed all the instructions in the article than please consider contacting your IT people for a static IP address and the gateway information.  If none of this helps please consider contacting your support centre for further assistance.