The printer driver seems to work on a standard print. However, when attempting to use advanced features, it produces unexpected results.

1. The Xerox completes the print, though selected feature is not produced, only single sheets. (eg. booklet)

2. An additional and incomplete print dialogue box appears (see attached) and when the box is cancelled (or any other action) it crashes the program initiating the print. 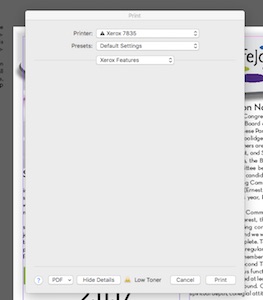 I have tried many different combinations of settings to produce the booklet. I will note, this specific file I am working with print as expected on the Windows version of the driver. Also, if any advanced features are selected in other programs, the same thing happens.

In some instances of setting combinations, I will getting an accounting coder error, which is inaccurate.

I have attempted the resolutions proposed in this thread. Also, the Printer Compatability Matrix lists the Xerox 7835 driver is available for Sierra OS (and the driver I have been using).

Since you attempted everything in the other thread, we can assume you did the complete driver/ppd/plugin removal, have reset the mac print system and used both the 3.90 Xerox driver and the 3.81.1 Apple driver. And also used IPP, LPD and HP Jet direct.

There is nothing else to try.

You can call Xerox (Assuming you are on a maintenance agreement). We may be able to remote in and see something you missed, or give you access to a 3rd (spar) driver which is version 3.94. But that should not actually be necessary since the linked solution is the one that comes from Xerox Officially after they (we) worked directly with Apple and Adobe to get the matter sorted out in the first place.