how to install Phaser 3020 on LINUX

I just bought a printer Phaser 3020 and I can't install it. I use Linux/Ubuntu 18.04.05 LTS and when I click on the setup file on the installation cd I get this error. To start with, I'm clumsy with the computer. There is someone who can help me, maybe even leave a link with a video, thank you so much 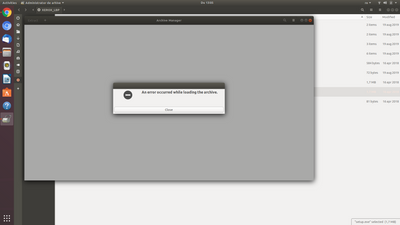 You can download the Linux software package from the Xerox Web site to install the printer software. If necessary, click on Drivers & Downloads on this window to download the Unified Linux Driver package to your computer.

Thanks for your time, I already did and it doesn't work anyway. Xerox support is virtually non-existent.
I found a workaround, first I had to install the printer with a Windows computer and connect the printer to the wi-fi network. After that I tried all the apps from the xerox official site but they are useless. I have a mobile with Android but none of the drivers or app suggested by the official site worked. So after 2 days of investigation I finally found NoKoPrint in just 2 minutes I was able to successfully install and print.
So the quality of the printer is good, too bad for the customer service of the product which is practically zero. I called the support service in my country and the "technician" didn't even know that the installation cd didn't work with Linux (that's why the error) and the only possibility was the non-working drivers from the xerox site. He even sent me another installation CD which obviously doesn't work. This is my first experience with Xerox and I'm pretty sure it will be my last as well. I would definitely not recommend this brand to anyone, because to get their products working you need an IT degree.

Ps: Linux has launched the new version of Ubuntu 20.04, if the drivers weren't working for the latest version let's imagine for the new one.
0 Kudos
Share
Reply