Sign In Help
Turn on suggestions
Auto-suggest helps you quickly narrow down your search results by suggesting possible matches as you type.
Showing results for
Search instead for
Did you mean:
Options
24 Replies

according to someone at Apple, it is a Xerox problem with the way the drivers are signed or compiled or something. But since Xerox never followed up I'm stuck in the middle of the finger pointing between the two companies, operating without the ability to print from one of our essential programs. If I were a big manufacturer and software developer like Xerox and Apple broke my software that disabled my software from running on my clients' computers,

for that visit my profile ankurupreti

Can confirm 10.15 (Catalina) fixes this. *sigh* the problem is... I don't want to push Catalina to all my lab machines.

Going to keep banging my head against the wall. lol.

The pdf workaround is pretty out there though, simpler to just switch to Firefox/Chrome until they fix it, some have been able to get Safari working by downgrading to the Apple driver (3.81) that comes with the OS

OK - In a puzzling turn of events, I upgraded a machine to Mac OS 10.15 Catalina and now the full Xerox Printer Driver (and accounting code screen) appears to be functional again! I have not upgraded my Xerox driver, and actually I was printing to an old WC7675 (my C70 is in another branch).

Does anyone else want to test and report back?

For my WC7675 I am using drver version 4.14.0 and printed from Safari and Preview with accounting code auto-prompted.

Starting with MacOS 10.12.4, both Safari and Preview enabled an internal feature called Library Validation which prevents our driver from loading the Xerox feature library, resulting in ‘Printer Features’ and the 'XR' keywords. Apple's Library Validation policy is such that it prohibits the ability to load any 3rd party vendor's own custom libraries, therefore we see the wrong strings within the driver UI.

Pages (and likely Numbers and Presentation) are all showing the same issue as Safari and Preview, where the UI displays 'Printer Features' and we see 'XR' keywords within the strings.

Unfortunately, Xerox is unable to affect these application software developers to not enable the Library Validation feature.

There are also no plans to attempt to address this from the Xerox driver perspective at this time.

Just so you guys know... this is not a Xerox problem... it happens with our Konica Minolta bizHub c364. 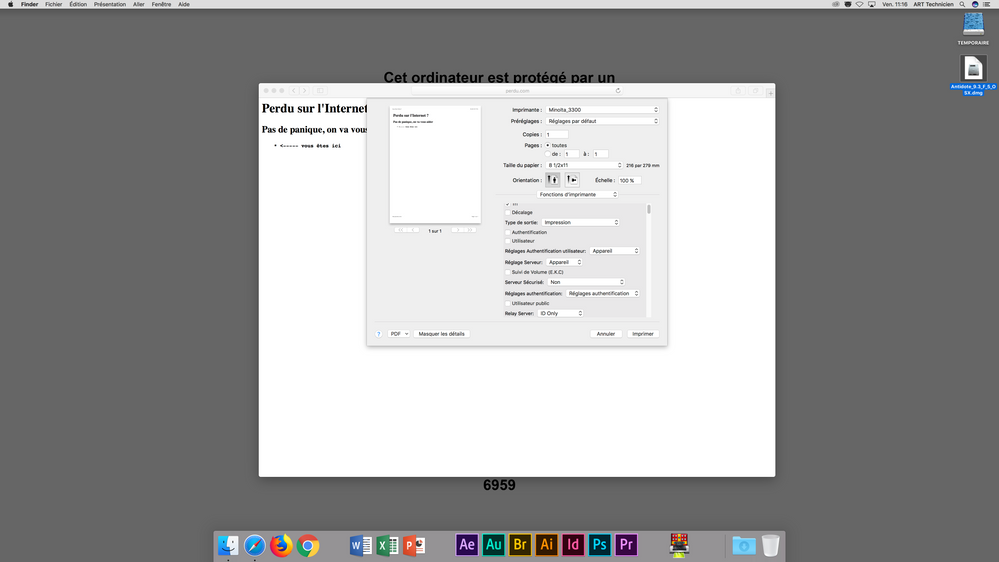 3.X drivers don't have the problem, but they don't support VersaLink and AltaLink devices because 3.X stopped being developed before they launched. That does not in any way pose an issue to the C60-C70 models

As far as I know, Xerox never announced they would fix this, the statement from Apple was that in June they would stop supporting 32 bit applications, but they have increased that timeframe it would seem with the announcement that 10.14 will launch, and will support 32 bit, but now they will not just once display an error when you use one (ala 10.13), they will display that error that you should not use 32 bit applications every single time you use it (10.14).

Safari is broken in a completely different way, as I have been told, the developers don't follow Apples own guidelines.

No idea on Pages, it didn't work late last year, there was an update to pages and it did work, the latest release no longer does, I have no idea why or what update caused it.

Of course for official answers from Xerox engineers and developers, you need to go through them by phone, I am just in the trenches and here un-officially, answering what I can, when I can, to the best of my ability. All my answers are from my experience (Working in the support trenches) and via 3rd party information passed down from up high (SPARS sent to Engineering and answered) and simple Google searches.

Any update as to whne the "printer features/Xerox Features" issue is going to end?  Have completely reset print system.  OSX 10.13.5, driver package 4.14.0 freshly installed and still seeing "Printer Features" in different applications more Specifically in Safari and Office but have seen instances in Pages as well.  I know the last word was sometime in June 2018 but we're nearing the end of June and still seeing the issue....

I thought that as of Yosemite and later Safari only ran in 64-bit and was unable to run in 32-bit.

I completely understand most people don't have the same type of environment I do with the customer who is affected the most by this issue. Their office is basically a lab of computers, 100% macs, people switching desks every time, multiple times a day, and everyone with different accounting codes that need to be input for EVERY PRINT (we have account code prompting turned on). Also, the main applications used are Office, FileMaker, and a web browser, as most of their work is done on online applications. So we are entering in unique accounting codes with every print, many of which come from a browser. And the C70 is the only printer available in this room. And usage is high - we had to upgrade to the C70 from the WC7675 because we were constantly exceeding the recommended volume every month.

I have always whole-heartedly recommended Xerox solutions because of their previous history of high quality, durable, and consistently Apple/Mac compatible products. Sure there have been times when things have been broken and needed to be fixed, and the support groups have always been quickly responsive with a solution. Today I do not have the same confidence I used to have. Thats why I'm so stubborn and hard set on getting this figured out and understanding why it isn't working and hasn't been fixed over the past 8 months.